ToothStars / Oral Health / Why You Should Switch to a Soft Toothbrush 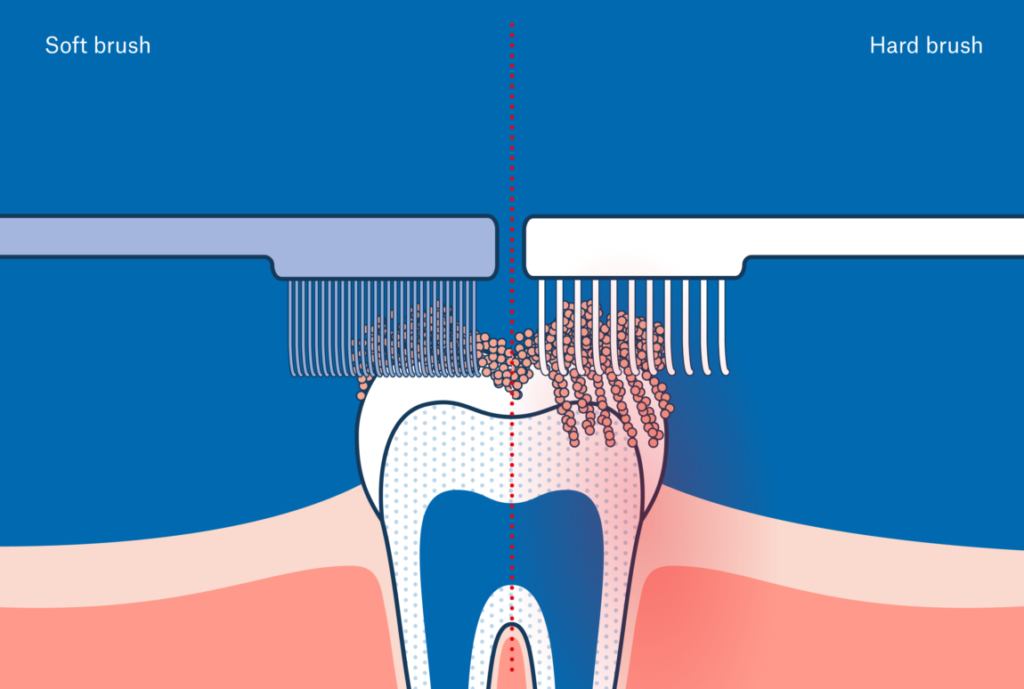 In theory, a toothbrush with hard bristles should get the job done far more effectively than a softer brush. It’s simply a case of physics at work – stiffer bristles getting to work on dirt and debris much more vigorously. In turn, millions of people worldwide use hard toothbrushes morning and night, thinking they’re doing their oral health and hygiene a favour.

In truth, harder toothbrushes can actually damage your teeth and gums. This applies to both everyday manual toothbrushes and even the very best electric toothbrushes for which harder brush heads can be purchased. Research having suggested that around one in every five adults has damaged their teeth or gums through overly-aggressive brushing.

For many years now, dentists have been urging their patients and the public in general to step away from hard toothbrushes in favour of something softer.  Incredibly, any number of manufacturers worldwide now produce extra-hard brushes – a step up from the usual hard-bristled brush. Ask any dentist and it’s likely they’ll tell you that just about the worst thing you can do for the health of your teeth and gums is to use a hard brush.

But why is it that hard toothbrushes are to be avoided? And if you choose to go ahead and stick with a hard brush, what’s the worst that can happen?

Read on and discover just a few reasons why you should make the switch to a soft toothbrush right now:

They Save Your Enamel

First of all, it’s worth remembering that once the enamel on your teeth has been worn away, it’s gone for good. There’s absolutely nothing that can be done to restore this natural protective layer. The problem being that while a harder toothbrush can do a great job getting rid of dirt and bacteria, it can also do a good job scrubbing the enamel clean off your teeth. The erosion may be slow, but it’s a steady progression towards the kinds of problems you would probably rather avoid. Given the fact that a softer toothbrush can be just as effective in keeping your teeth and gums clean and healthy, there really is nothing to gain by using a harder brush.

They Protect Your Gums

It’s also important to acknowledge the fact that while your teeth may be relatively hard and durable, the same cannot necessarily be said for your gums.  In fact, gums are surprisingly sensitive and susceptible to damage with even the slightest irritation. A key point to remember – harder toothbrushes have been linked with the kind of damage that can lead to problems with receding gums.  For obvious reasons, this isn’t a desirable outcome for anyone and may prove to be irreversible. A pretty heavy price to pay for using a hard toothbrush, which isn’t actually getting the job done any better than a softer toothbrush. If concerned about gum recession and general gum health, stick with a high-quality electric toothbrush recommended by dentists.

There’s no disputing the fact that to use a softer toothbrush is to see its condition and quality deteriorate far quicker than a comparable hard brush. So, you may ask, how can this possibly be advantageous? The answer – it’s the perfect way of ensuring you replace your toothbrush on a regular basis.  Evidence would seem to suggest that the overwhelming majority of people – even those with the best intentions – don’t replace their toothbrushes nearly as often as they should. The problem being that over time, even the best toothbrush loses its capacity to get the job done properly. It’s important to remember to replace your toothbrush every couple of months or so – a soft brush being a good reminder of when to get it done.

They Can Reduce Sensitivity

While it’s strongly recommended that most people switch to a soft toothbrush, those with sensitive teeth could find making the switch particularly beneficial.  As mentioned above, one of the biggest problems with harder brushes is the way in which they gradually erode the protective surface of the tooth. In patients with sensitive teeth, this can make the existing sensitivity even worse.  Or if you don’t already suffer from sensitive teeth, you may develop sensitivity by brushing your teeth too aggressively. Once again therefore, it simply doesn’t make sense to take the risk – given how a softer brush can get the job done just as effectively. Switch to a softer brush and you may find the sensitivity you’ve been experiencing isn’t quite as bad as it used to be.

They Can Clean More Effectively

Last but not least, how is it possible that a softer toothbrush will get the job done even more effectively than a hard toothbrush? The answer…well, it all comes down to those awkward gaps and spaces around the mouth that are tricky to get into at the best of times. Think of it this way – there’s a gap between two of your teeth that’s full of all manner of nasties you need to get rid of. With a harder brush, it’s going to be borderline impossible to get the bristles where they need to be without applying extreme force. Even then, they may simply skip over the gap and fail to deliver an adequate clean. By contrast, softer bristles are far more pliable and easy to manipulate. Hence, they can get into the kinds of gaps and corners that may escape a harder brush. Contrary to popular belief therefore, harder brushes don’t always get the job done better.

The long and short of it therefore is simple – there are very few instances in which a hard toothbrush is recommended over and above a softer toothbrush. If in any doubt, simply speak to your dentist for more advice. Chances are that if you’re currently using a hard toothbrush, they’ll advise you to switch to something a little softer as quickly as possible!