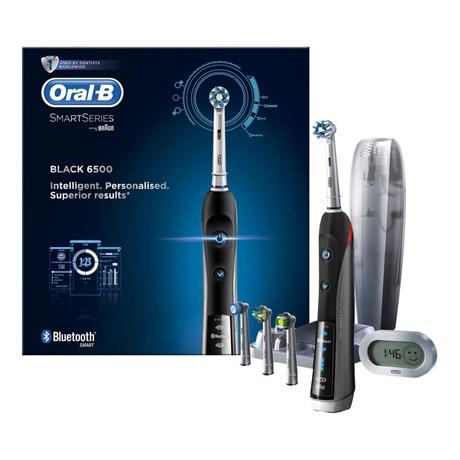 Having been on the market for such a long time, does the Oral-B Black 6500 really have what it takes to compete with its newer and more advanced siblings?

When the Oral-B Black 6500 came out, it heralded something of a huge turning point in the design and manufacture of cutting edge electric toothbrushes. The reason being that it was one of the first devices of its kind to feature Bluetooth technology. Which it has to be said divided consumer audiences right down the middle.

Which isn’t difficult to understand. After all, do you really need Bluetooth baked into an electric toothbrush? The answer…well, just because you don’t need it doesn’t mean it isn’t a seriously cool addition to the package.  Regardless of how sceptical you might be at first, it really isn’t long before you find yourself warming to the idea of connected toothbrush technology!

Even today, the Oral-B Black 6500 package remains genuinely impressive. The brush itself is right up there with the best the market has ever seen in terms of quality and performance alike. Six different cleaning modes, interchangeable brush heads and the kind of design and materials that just scream premium quality. It feels great to hold, looks great in any bathroom and does a great job when put to the test.

Included in the kit you’ll find everything you need to charge it, store it and take it on the go. Along with the classic Wireless Smart Guide, which has since been retired from later models. Which is slightly unusual, given that this was and is one of the biggest selling points of the Oral-B Black 6500. 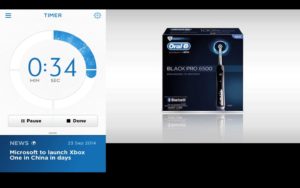 As with other brushes from the series, the star of the show with the Oral-B Black 6500. The biggest difference being that this particular brush also ships with a Wireless Smart Guide – a little extra that made a big difference when the Oral-B Black 6500 first launched. It’s basically a simple waterproof clock, which can either be stuck to a smooth surface or placed on the bathroom shelf.  By connecting with the Oral-B Black 6500 via Bluetooth, it serves as a handy timer for each brushing, letting you know which brushing mode you are using at the time and featuring a delightful smiley face to encourage better brushing habits.

It also serves as a standard waterproof clock, which makes a handy addition to any bathroom.

The Oral-B Black 6500 can also be linked with the mobile app that’s compatible with both iOS and Android devices alike. Which basically takes the functionality of the Wireless Smart Guide to the next level, providing deeper insights into your brushing habits and maintaining a log along the way. The idea being that by the time the novelty has worn off, you have already developed better brushing habits in general. It may sound like a gimmick, but it is a gimmick that definitely works. When you first start using this thing, the app really is so much more entertaining than you might expect! 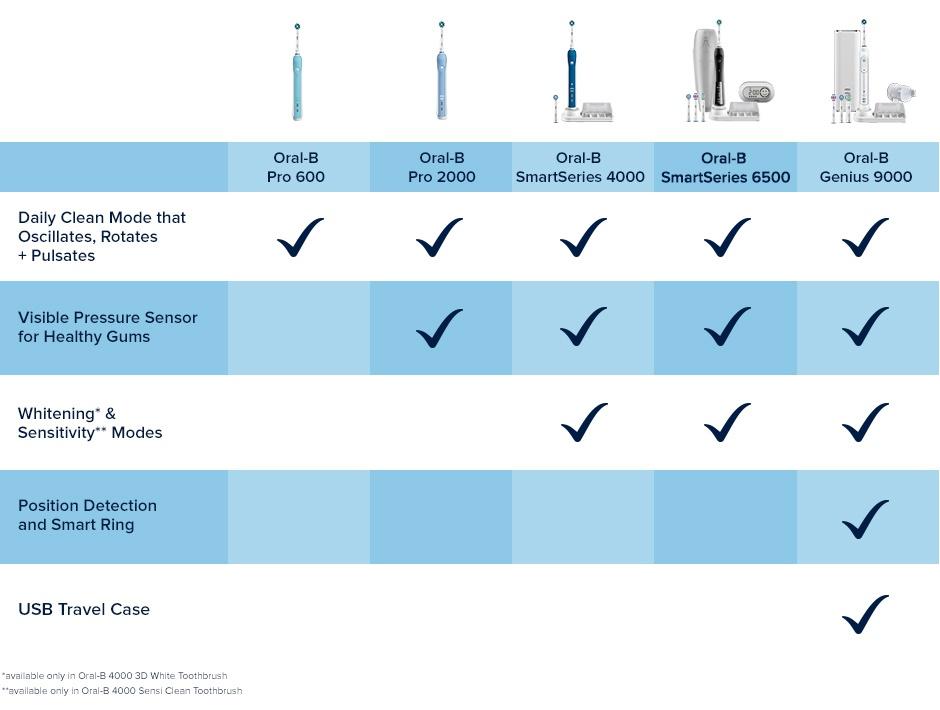 In terms of what separates the two, the 9000 has a battery which lasts approximately two days longer and charges slightly quicker. It also has a slightly slimmer form and more comfortable hold, along with a SmartRing to indicate excessive pressure. The 9000 has a somewhat faster brush action than the 6500 and ships with a travel case that is considerably more premium.  However, the Oral-B Black 6500 features the highly popular Wireless Smart Guide which the 9000 does not.

And of course, the fact that the Oral-B Black 6500 is so much cheaper makes a big difference.

Advantages of the Oral-B Black 6500

As for the key advantages the Oral-B Black 6500 brings to the table, you can’t help but be impressed by the following:

Disadvantages of the Oral-B Black 6500

As for where the Oral-B Black 6500 isn’t quite so impressive, we picked up on the following very slight and debatable issues only:

Despite the fact that one of these two brushes is technically superior to the other, they are both absolutely equal in terms of appeal. The reason being that while the 9000 boasts more advanced technology and functionalities, the Oral-B Black 6500 really is unbeatable in terms of value for money. The launch of the 9000 saw the Oral-B Black 6500 begin an on-going series of heavy price reductions – stumble across a discount deal and the 6500 really is a steal!