ToothStars / Naturally / The Truth About Coffee and Teeth 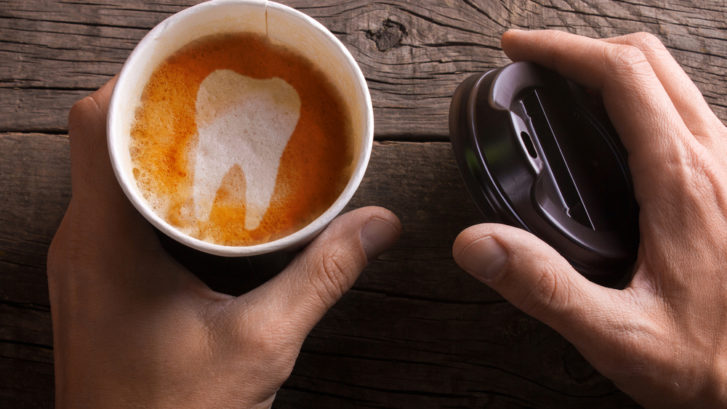 When it comes to coffee and oral health, the general consensus is quite simple.  That being – coffee is bad for your teeth and should therefore be avoided.

It’s generally acknowledged and accepted that if you want to keep your teeth in the best possible condition, you should at least moderate your daily java intake.  The problem being that for the vast majority of people living busy lifestyles, coffee is as much a part of daily life as the rising sun.

So it’s a pretty standard regime shared by millions. You get up, you brush your teeth with a high-tech electric toothbrush recommended by dentists, finish the job with a quality mouthwashand feel delightfully fresh and clean. Only to then go and hit the coffee machine and feel guilty for doing so.

But should you reallyfeel bad about drinking coffee throughout the day? Given the apparent health benefits of caffeine for our overall health and wellbeing, is doing a number on your teeth a price worth paying?

Depending on whom you ask, you may be surprised by the answer.

Coffee is known for its acidic properties, along with its impressive ability to stain just about anything it touches. Your teeth being no exception to the rule.

But what if we were to tell you that a cup of strong black coffee could actually improveyour oral health? Chances are, you’d react with the same scepticism we did. Nevertheless, new research carried out in Brazil suggests that when coffee is consumed in moderation – and without being adulterated – it can actually stop tooth decay in its tracks.

The reason being that a certain type of coffee bean has been found to have anti-bacterial properties. A coffee bean which finds its way into at least 30% of all coffee produced worldwide. According to the researchers, it all comes down to the way in which bacterial biofilms form on the surface of the tooth, which are the main cause of tooth decay and gum disease.

When put to the test, it was found that the anti-bacterial properties of the coffee beans studied could break down these biofilms and prevent decay from occurring. Should this be true, it would suggest that to consume coffee in moderation is to potentially do your teeth a favour.

No Milk, No Sugar

Given the relatively rudimentary nature of the study, the researchers were also unwilling to make any outright promises. The experiment carried out suggested that strong black coffee consumed in moderation could be beneficial, but much more extensive studies will be needed to confirm if this is the case.

Nevertheless, the discovery could lead to any number of treatments and supplements making their way onto the market, using the apparent power of coffee to tackle some of the world’s most common oral health problems.

As for the potential for coffee to stain a person’s teeth, this is a problem science isn’t likely to solve in the near future. Coffee is packed with countless compounds that can have a significant and surprisingly rapid effect on the appearance of a person’s teeth. Those who consume coffee on a regular basis being far more likely to develop deep stains and general discolouration than those who abstain.

Once again, not a particularly reassuring thought for those who cannot get by even a single morning without coffee.

Which begs the question – is there anything you can do to stop coffee staining your teeth? Or at least, reduce the effects somewhat?

Of course, the best way to avoid stains is to moderate your intake of coffee. If this simply isn’t the option, there are a couple of tips and tricks worth bearing in mind.

For example, the most effective way of avoiding stains while consuming coffee is to drink it through a straw. By minimising direct contact with your teeth, you in turn reduce the coffee’s capacity to do a number on their appearance. This can have a somewhat negative impact on your enjoyment of your java, but it’s up to you to determine where your priorities lie.

In addition, it’s worth using a good-quality whitening toothpaste and mouthwash, as part of your daily oral hygiene regime. The reason being that while few of these products live up to their OTT claims, they can nonetheless be useful for preventing surfacestains from setting in. They won’t have a huge impact on teeth that are already discoloured, but can be good for preventing discolouration in the first place.

Speaking of which, you’ll also need to keep a meticulous eye on your general oral health and hygiene. Brushing and flossing twice a day, using a good-quality mouthwash, avoiding sweets and so on – all important if looking to hold onto a bright and healthy smile.

As for things that aren’t going to do much good at all, don’t fall into the trap of thinking adding milk or cream will make things any better. It’s natural (and logical) to assume that white coffee is better for your teeth than black coffee, but this simply isn’t the case at all. Likewise, switching to tea isn’t going to prevent your teeth from becoming stained and discoloured. Tea is just as rich in the kinds of compounds that will eventually make their mark on your pearly-whites.

Roughly summarised therefore, it’s all up to you. Consumed in moderation and in conjunction with a consistent oral hygiene regime, coffee doesn’t have to be an enemy to your teeth and gums. It’s simply a case of ensuring you don’t get carried away, keeping a close eye on your everyday habits.

Rinse your mouth on a regular basis, chew sugar-free gum throughout the day and use a straw where possible – all great for avoiding coffee stains and discolouration.