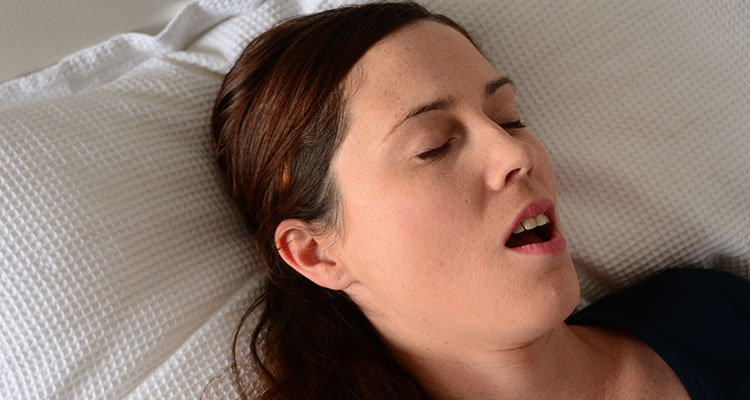 While the term may often be used to describe certain individuals in something of a humorous or insulting manner, mouth breathing is a very real and very common problem.  In fact, millions of people of all ages from all over the world are overnight mouth breathers.

For anyone unfamiliar with the concept, the term is relatively self-explanatory.  Referring to those who breathe through their mouths instead of their noses while asleep. On the surface, mouth breathing doesn’t come across as anything particularly problematic. Nevertheless, it can be inconvenient, uncomfortable and even unhealthy for those affected. Particularly when it comes to oral health and hygiene, overnight mouth breathing can be highly detrimental.

It can be difficult to identify the cause of mouth breathing, given that there are so many potential causes at work.  Or in some instances, no specific identifiable cause. Those who breathe through their mouths overnight do so because the body’s natural process of breathing through the nose is disturbed or prevented for some reason or other. Which is precisely why most people breathe through their mouths overnight while suffering colds and flu – all of which has a habit of making the associated symptoms even worse.

Why Is Nose Breathing Important?

Nose breathing overnight is not only more comfortable, but also much better for our health in general. For one thing, the nose acts as something of a filter for the air we breathe. Breathing through the nose helps remove some of the more harmful impurities and microbes from the air, which is far better for our health across the board. In addition, breathing through the nose promotes optimum oxygen absorption and prevents the airways from becoming dry, irritated and sore. This is furthered by the way in which the lining of the nose warms and moisturizes the air we breathe, before it arrives at our lungs.

So by this point you may be wondering – what does all of this have to do with oral health and hygiene? The answer is relatively simple – a lot.

When you breathe through your mouth instead of your nose at night, the most immediate and obvious side effect is dryness. Rather than remaining at least predominantly closed, moisturized and protected throughout night, the breathing action through the mouth instead dries it out quite severely. Which along with being uncomfortable can be incredibly problematic – given the way in which saliva is the single most important defensive ‘tool’ your mouth has at its disposal.

When the mouth becomes excessively dry during the night, it becomes unable to fight the kind of bacteria and germs that can cause any number of problems.  From bad breath to cavities to gum disease and so on, all such issues may be triggered or exacerbated by prolonged dry mouth. Which is made even worse by the fact that these kinds of issues have also been directly linked to potentially negative effects on the rest of the body’s physical health from top to bottom. Which means that while mouth breathing and a dry mouth may come across as relatively minor issues, the reality is actually quite the opposite.

If you find yourself suffering from a dry-mouth on a regular basis, there are various ways and means by which the severity of the problem can be reduced.  One of which being to take a second look at the tools and products you use to keep your mouth clean and healthy in the first place. For example, the very best mouthwash for dry-mouthused before and after sleeping could certainly help.  So too could getting into better flossing habits and using the best water flosseron the market, so as to help remove as much debris and bacteria from your mouth as possible.

There are also various lifestyle habits that can contribute to dry mouth – the consumption of alcohol and smoking cigarettes being two primary examples.  And for obvious reasons, it is of the utmost importance to ensure that you are adequately hydrated at all times and do not allow yourself to become dehydrated under any circumstances. Keeping tabs on your overall health and oral hygiene can be surprisingly effective in the prevention and treatment of a dry mouth.

How To Stop Mouth Breathing At Night

Unfortunately, when cases of dry-mouth are attributed to overnight mouth-breathing, simple everyday measures like those mentioned above may not be sufficient. As is the case with most issues concerning health and wellbeing, the best advice is to always speak to your doctor or dentist, should you suspect you have a problem. The reason being that while it is comparatively unlikely, there is a possibility that your own case of dry-mouth could be attributed to something more serious. Or if not, something relatively minor but maybe correctable of treatable.

Should this be the case, there may be a relatively quick and easy solution that could eliminate the problem once and for all. If not, your dentist or doctor may recommend something of a course of treatment, or another preventative measure that could stop the issue in its tracks.

If professional intervention and treatment isn’t required, there are various at-home ways and means by which overnight mouth-breathing can be brought under control. Which is great news not only for those who suffer from the problem, but also those who may be unable to sleep due to their snoring! Just as long as anything serious or dangerous has been eliminated, you can feel free to try a number of tried and tested methods for bringing mouth-breathing under control.

…which we’ll be discussing in the second part of our post, so be sure to stay tuned for more!