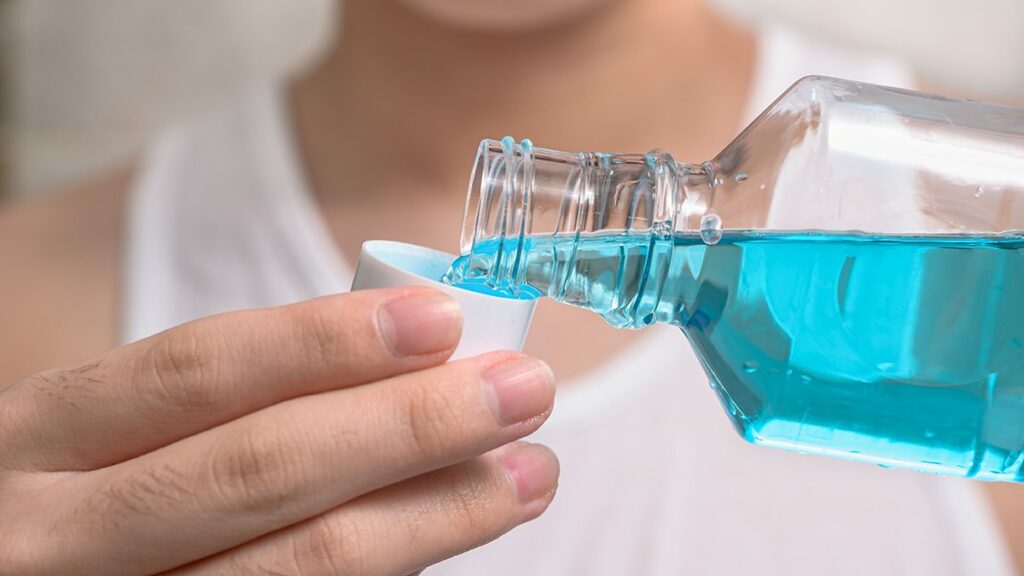 Using a dentist recommended mouthwashis something most of us do instinctively. It’s not a substitute for regular brushing and flossing, but can nonetheless make a real difference as part of a broader oral hygiene routine.

Still, questions and concerns regarding the effectiveness and appropriateness of mouthwash products remain commonplace. To help shine light on a few important issues, we’ve put together a brief yet informative FAQ covering the ins, outs, ups and downs of mouthwash.

Check out the following and you might just learn a thing or two about the unsung hero in your bathroom cabinet:

Dentists recommend using the best mouthwash products available as there are parts of the mouth a toothbrush cannot reach. This applies to all types of electric and manual toothbrushes alike, which are unable to reach certain corners of the mouth and cannot clean thoroughly between the teeth.

Mouthwash gives the whole mouth a hygienic clean, killing bacteria and removing far more plaque than brushing alone. It is effectively a way of ‘topping up’ the brushing process, boosting its effectiveness and getting into places your toothbrush cannot reach.

Consequently, the regular use of mouthwash has been associated with a reduced risk of gum disease, tartar, bad breath and tooth loss.

What Does Mouthwash Do?

Most mouthwash products fit into two main categories – cosmetic and therapeutic. Cosmetic mouthwash is the type that is designed to combat bad breath, either by eliminating bacteria or masking the problem with a fresh fragrance. Elsewhere, therapeutic mouthwash focuses more on fighting plaque, reducing the risk of gum disease and preventing tooth decay.

Of course, the best mouthwash products are those that deliver all of these benefits at the same time.  If unsure, consult with your dentist or pharmacist for their recommendations. The vast majority of high-quality branded mouthwashes are effective multipurpose products, but some will always be better than others.

How Should I Use Mouthwash?

Exactly when mouthwash should be used is a surprisingly contentious topic. The normal way to use mouthwash for most people is as recommended by the manufacturer, immediately after brushing and flossing. But there are those within the dental community who swear by using mouthwash before brushing.

The logic behind the latter argument lies in the benefits of leaving the residues from the toothpaste in the mouth for as long as possible after brushing. When you brush, the fluoride and beneficial minerals from the toothpaste remain in your mouth and strengthen your teeth against decay. If you rinse immediately after, you rinse away all of these beneficial compounds.

There’s logic on both sides of the argument, so it’s essentially a judgment call.  Again, you can always call on your pharmacist or dentist for advice, if unsure which is the best option for you.

Should I Dilute My Mouthwash?

Mouthwash should only be diluted if instructed to do so by either your dentist or the manufacturer. This is due to the fact that diluting mouthwash will inherently compromise its capacity to perform its function.

If you find it necessary to dilute your mouthwash because it is too strong, consider switching to a lower-strength formula. Contrary to popular belief, mind-blowingly strong mouthwash products are not inherently better than their milder counterparts.

Likewise, a non-alcoholic mouthwash can be just as effective as an alcoholic alternative. Diluting mouthwash against the advice of the manufacturer (or your dentist) is therefore not typically recommended.

What Happens if I Swallow Mouthwash?

Conventional mouthwash products are not so toxic as to pose a major risk to your health and wellbeing, if accidentally swallowed. Just as long as you do not ingest a large quantity, you’re unlikely to suffer any adverse effects.

Swallowing tiny amounts of mouthwash on occasion is largely harmless and no cause for concern. In the unlikely event that you or a member of your family swallows a large quantity of mouthwash, seek medical advice as promptly as possible.

In the sense that whitening mouthwash helps prevent stains from setting in, the answer is yes. Whitening mouthwash is designed to get to work on the surface of the teeth, removing residual stains before they penetrate deeper. It can therefore be great for prolonging the results of a teeth whitening treatment.

However, in the sense that any mouthwash can make a major difference to the whiteness of your teeth, the answer is no. Whitening mouthwash is almost always marketed in a misleading manner. Mouthwash alone cannot and will not transform a mouth full of discoloured teeth into a gleaming white smile.

Are Mouthwashes Good to Use in General?

The short answer is yes – mouthwash is good to use in general for most people.  Unless your dentist has specifically advised against the use of mouthwash, it can make a huge difference to your oral health and hygiene.

Understandably, apparent links between high-alcohol mouthwash and certain types of oral cancers have caused concern over the years. But what’s important to remember is that countless subsequent studies have found no such links whatsoever. Quite simply, there is no evidence to suggest that mouthwash is harmful, while there is overwhelming evidence to suggest it is beneficial.

Of course, you can always raise your concerns with your dentist or practitioner, if looking for further reassurance.

When Should My Kids Start Using Mouthwash?

The general guideline is that kids under the age of six should not use mouthwash. This is simply due to the fact that it is practically impossible to prevent younger children from swallowing mouthwash. From the age of six, parents can introduce their kids to and approved child-friendly mouthwash, to be used under strict instruction and supervision.

On that note, it’s important to ensure your kids only ever use specific mouthwash products designed for children. Diluting adult mouthwash to make it more palatable is inadvisable, as it may contain more fluoride than is considered safe for kids.

Not to mention, more alcohol than any child should be exposed to at such a young age.